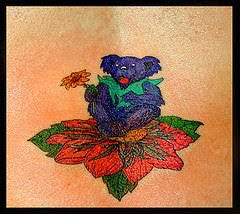 The Bear Came By and I got on.
Thanks Tammy!

I was unable to find a New Years Day Other One to share with you, so here's one from my birthday in 1972. Very heavy on Phil in the mix, which is sort of a treat for Other One fans.

"That's It For The Other One"

["The Faster We Go The Rounder We Get: aka part 2]

Spanish lady come to me, she lays on me this rose.
It rainbow spirals round and round,
It trembles and explodes
It left a smoking crater of my mind,
I like to blow away.
But the heat came round and busted me
For smilin on a cloudy day

And when the day had ended, with rainbow colors blended,
Their minds remained unbended,
He had to die, oh, you know he had to die.

The faster we go, the rounder we get