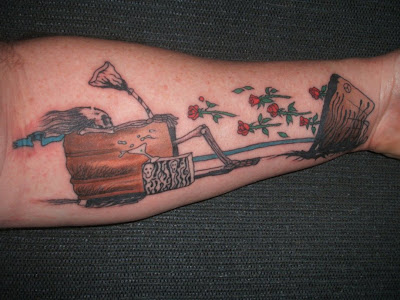 Okay folks, we're in for a treat. I was first contacted by Ernie back in May of this year (2010), and he sent in his Maxell ad inspired (lot sticker inspired) forearm piece, which was posted as:
GD Tattoo #95 It's Worth It.
So Ernie says to me, (and I paraphrase...) hey dude... I have 12 Grateful Dead related tattoos, would you like to see more of them?
I figure, sure why not, right? I mean, this is a Grateful Dead Tattoo blog.
So, lets spotlight Ernie's tattoos...
First of all, we need to know that ALL of these tattoos were done by Dez Moon (Desmond Mooney) from White Lotus Tattoo and Fine Art Gallery in Toms River NJ
Secondly, we need to know that Ernie digs Morning Dew maybe a bit more that the average Dancing Bear. So I'm going to do a few things here...
Here's a link to www.archive.org that will get you to EVERY show on the archive that has Morning Dew in it, sorted by date, most recent first. That's 1034 SHOWS folks, thats a lot of Grateful Dead spanning from 1995 back to 1967!
And some youtube...
pretty good stealth video from 1986, very good Dew. Let some of that play while you take a few minutes to check these out.
Here's a nice Blues For Allah. I've always thought this image made for a very nice tattoo. Grateful Dead Tattoos has posted two other Blues For Allah tattoos that can be seen here, or by hitting the tags on the right. 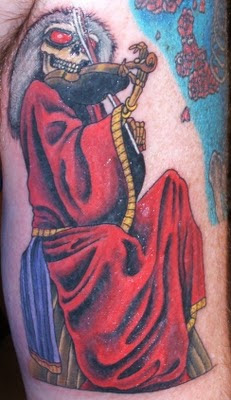 I hear that Furthur brought back Blues for Allah this year. Crazy man, crazy. That's a link to the live rendition of the original album.
I'm Uncle Sam - that's who I am... I've posted 5 Uncle Sam related tattoos, and I have to say, they kick ass. 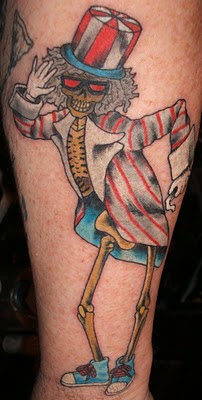 If Uncle Sam above had a dog, I'd imagine it would look like this... 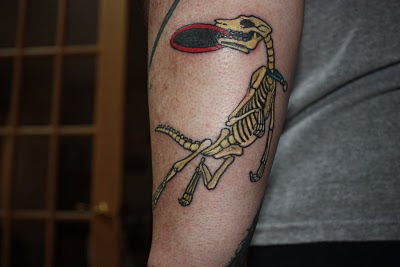 This dog reminds me of Bobby's Yellow Dog story...
or this gem...
"My dog has no nose"
"No Nose?! How does he smell?"
"Awfull!"
Here's a series of Jesters. I've posted a handful of Jester tattoos before. As far as GD tattoos go, I think the Jester, or Bard, or mandolin player, or whatever you want to call them makes a damn good one.

This tattoo I call Reddy Kilowatt because I don't know what else to call it. (suggestions appreciated). The real Reddy Kilowatt has a long history, and can be seen here...
Phil Lesh was known as Reddy Kilowatt on the Grateful Dead's first, and self titled album. 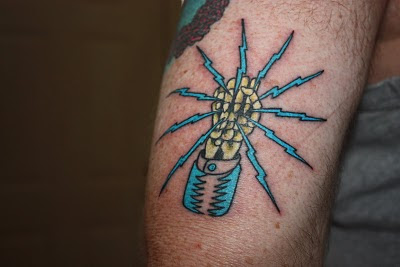 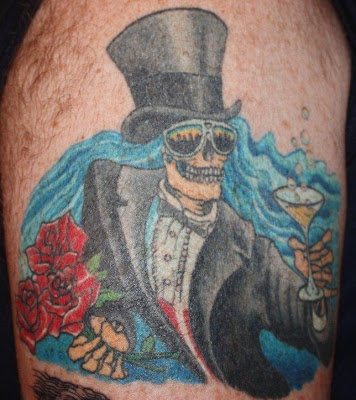 Bertha is a classic Grateful Dead image, as easily recognized as the Steal Your Face.
Dark Star Palace has a great post about the Skull Fuck album art and the Rubaiyat of Omar Khayyam.

Playing cards are a great Grateful Dead tattoo, as gambling and cards come up quite a bit in Grateful Dead song lyrics. Here's another, a King of Roses.

"Like a surfer riding on a tidal wave" This one is still in the works, but looks pretty fun. 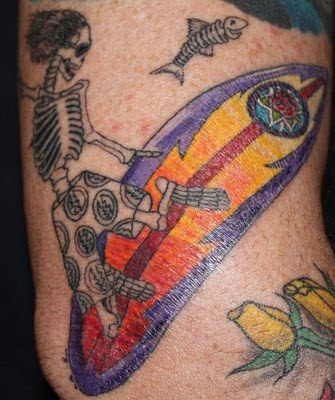 So, I'd like to thank Ernie for sharing his tattoos with us all. He's sporting some very original work, and hopefully you find some inspiration for your next tattoo.

The faster we go, the rounder we get